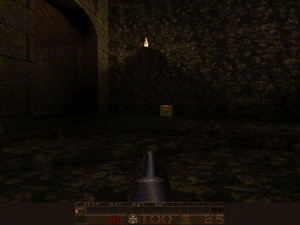 During the (south hemisphere) winter of 2008, I started a port of the classic id Software game Quake to the Nintendo Wii console with homebrew development tools. Using the Gamecube port by Peter Mackay as a base and relying on the similarities between the platforms, it was mostly a matter of making use of the new hardware. One exception being the hardware acceleration of graphics, which wasn’t used on the Gamecube port at all, it was software rendered.

So, in one week without any documentation other than header files, I was able to make use of the WiiMote for aiming (much like the Metroid Prime 3 game), SD card for reading the game data, wi-fi for networking and full hardware 3d acceleration for making a port of the GLQuake renderer to Nintendo’s GX API.

The port now lies dormant, with still a few small bugs to fix. When Peter Mackay gave me access to the repository, times where different and repositories more centralized. Now, google-code is dead and the project was migrated to github, so everyone can make their own fork and even update it to the Nintendo Wii U or Nintendo Switch. 🙂

The final code resides in this repository.